With grateful thanks to Aoshida Audio , yours truly can bring you the fruits of an exclusive collaboration. SMSL have teamed up with Aoshida and have produced a rather elegant looking little black stack, consisting of a desktop DAC, the DO100, linked here –

Just click on the link and you can see what Aoshida and SMSL have to say about them. SMSL is short for Foshan Shuangmusanlin technology Co., Ltd. They have been around since 2009, which makes them veterans in Chinese terms. The company are from Shenzhen and they concentrate on DACs and Amps in the desktop sector. This is their very latest release.

I come from a generation that can remember life before portable audio. Back in the 70s and early 80s , the average suburban house in the UK went from having a music centre to a stack system. A music centre was a single piece of furniture, which took up around the same space as a table. In it would be a record player, radio and possibly a cassette player. To save space and create a wife friendly look, matching speakers would be pushed as close to the sides, with some space to store records and tapes inside the rest of the wooden cabinet drawers and shelves.

This gave way to a upwardly mounted, LED infested array of an altogether more ambitious number of devices. CD players had now been introduced, dual cassette recorder/players, graphic equalizers,PLL tuners, timers, you name it. The higher the stack, the better.

This was all connected up at the back by cables that were peculiar to the one brand, which made it difficult to mix and match components. Speakers had now become free standing. They often looked flashier than they really were.

40-50 years have gone by and the average living room does not have a hi-fi. A large TV set has taken pride of place. The audio companies have had to diversify. This has brought music 🎵 into a different era- and personal audio is in, with the less space it can take up, so much the better. Portable audio is with us. Wireless audio has not taken over – not just yet. The mini stack, diminutive by yesterday’s standards, is a smart but practical solution to many a seeker of perfection in the budget to mid range sector of the market.

As is typical of this sector , you get a lot for your money 💰 Take the HO100 for example. 3 watts of power, balanced input and outputs, 3 gain levels.

The DO100, costing a little more, of course has a bit more to talk about. The DAC chips are ESS9038Q2M, there are 4 dual opamps, a new XMOS chip, a new Qualcomm QCC5125 Bluetooth 5 chip, a remote control, all the usual inputs and RCA or balanced outputs. The newer chips mean that there are a number of configurable functions available, such as USB 1 or 2, filters and a clock/jitter adjuster for tweaking older digital devices. Did I mention about the discrete, brushed black cosmetics?

There is much that could be connected to this little hi-fi. The cables supplied are a screw in Bluetooth antenna, 2 power cables and a USBC cable. To take advantage of the balanced things in offer , you’ll need to think about XLR input cables and 4.4 headphone cables, or adapters. At the very least you’ll need a set of RCA cables before you’ll hear anything from the system. The manuals supplied tell me that I have the ability to squeeze a decent ratio of stability and sound quality from an XMOS chip that supports a feature called DP. This can be done with a couple of presses on the remote control, the last word in luxury from the stack systems of yesteryear. I was dubious as to whether there were any legs in the statement that some older digital sources might need some time to adjust to their optimal. I had no need to change from the minimum setting for my Samsung A52 smartphone. This bred a healthy degree of scepticism. My Sony CD Walkman, the D-EJ915, the last of the great Sony’s, was connected via the optical in. It instantly started getting read errors. I adjusted almost to the last setting until it settled down. It would appear that perhaps the digital medium has made some progress since the last decent Walkman release was unveiled in 1999….

Or, how does SMSL stack up against the competition. Sorry, I had to do it 🙂🥳 It just so happens that I have a few iFi bits and pieces knocking about in the Team Subjective office at present. The iFi Zen has a separate Bluetooth receiver and DacAmp. The DacAmp can be further refined by hooking it up to the Zen headphone amplifier. I happen to have the set. Furthermore, I have the all in one iFi Neo. Hopefully you’ll be aware of the iFi brand. They’ve been making some attractive looking mini stacks for a while now. The Zen is one of the nicest I’ve seen from them. The Neo is just to see how the SMSL differs from a more expensive product (Neo RRP £798) i.e what does the DO stack lack that Neo has in spades?

Well – most importantly , let us work out some pricing. £419 brings you the Zen blue, Zen Can and Zen Dac. The equivalent SMSL is $388, or £308 if the current exchange rate is converted. Ahah, but wait a minute, the iFi package has 3 boxes and SMSL has only 2 – that’s what you’re saying, right? But wait here a moment – let us now look at what the 2 stacks can do, in the great spirit of the 80s, where the stack system could do pretty much anything.

There are things 1 can do that the other can’t, but the SMSL can handle 50% more digital devices than the iFi with almost 50% more power on tap and at a 25% cheaper price. All of these factoids are fairly pointless if under strict test conditions the DO100 is given a knockout punch from the Zen. Below I have enclosed a handy 1 min 15 seconds of Two Princes , a 90s smash by the Spin Doctors. It is a WAV recording and it has been recorded exclusively for headphones, using Pro In Ear Binaural Stereo Mics and a Pro PCM Recorder. Everything is volume matched; same cabling – no extra filter switches applied, no bass buttons used etc. I plugged a £3500 pair of HiFiMan HE1000SE Planar Magnetic Headphones into the 4.4 balanced output of 3 different machines – the Zen, the DO100 and the iFi Neo. It goes without saying, lots of listening is needed before you truly begin to get the differences, if any, between all 3 recordings. It also makes logical sense to use the best headphones or earphones you have, with the best source you have available. The differences are subtle, but they are there.

The results are in

What did you think? Here’s my subjective opinion. The Neo was out on top. It had a cleaner, faster bass with more clarity which revealed slightly more micro detail and a slightly wider soundstage. The SMSL DO/HO100 was next, with a slightly thicker bass and lesser clarity and the iFi was just behind with a similar bass response but slightly less clarity. Let me tell you, these details were not as obvious as I was expecting; I used the HE1000SE for a good reason… It is a World Class Headphone and doesn’t need huge gobs of power to get that ultra thin diaphragm moving.

I did some A/Bing between the 3 on Bluetooth and the results were much the same, with the lossier nature of the codecs, meaning that a straight usb connection yielded better results from all units. I couldn’t do a match up on Optical and Coaxial because only 2 had these – of these 2, the Neo didn’t have a problem playing the ancient CD Walkman, but the DO100 needed some adjusting.

Today’s society has a renewed appetite for the stack system. There is a slight difference between then and now, however. It’s about 6 units less, about 1 metre less in height and 40 kgs lighter. Otherwise, the needs are the same! As houses get smaller, electronics gets more micro, TVs get bigger, and the real estate available for our beloved music slips further back into a secluded corner, there might just be enough space to secrete an SMSL and restore some balance into the modern lifestyle. Whatever headphones you have , it’ll be able to run them, with a pleasantly rich delivery, and it’ll run the older digital kit with precision too. It’s well built and although you may need to dig through a few drawers or invest in some balanced cables, it’s a product I could find few niggles with, as a solution to a decluttered desktop.

Getting the best from your HiFiMan Susvara 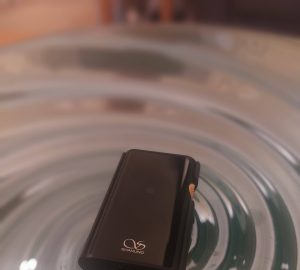