Nova Fidelity X35 Just Add Speakers – they thought of everything else!

Pros: Huge feature list that doesn’t compromise on sound quality
For what it offers – incredible value for money

Cons: Umm…it needs mains?
Won’t stream DSD through the network – will need to be uploaded to the hard disc or run from an external hard disc.
Dual Core processor – there is the occasional freeze when ripping CDs

X35 – AKA Cocktail Audio AKA Novatron

You may not have heard of this South Korean Company yet. These people have possibly thought of everything an audiophile could want in their pursuit to rid the World of boxes

I have seen the future. It lies within this box of gadgetry.
All in ones have come of age.

With thanks to Matt Esau of SCV Distribution, let me introduce you to my Adventures in Onederland, courtesy of the Nova Fidelity X35.

Have I got your attention yet?If, like me, you are still open minded that there are some innovations out there that are worth a look at, I suspect you are waiting patiently for me to jump into the rabbit hole and see whether this could be worth all this engineering.

Analogue In/Out
Moving Magnet stylus is supported for this feature. You can listen and record your records onto the hard disc, which will be offered at the time of purchase. Of course if you have one already, just pop it in. The default format for all recordings is WAV. The vinyl can be recorded at up to 24/192 resolution. So your record collection can either be archived, or used as normal through the X35.
You can hook this up to an integrated or power amp and simply use it as a source.
Digital In/Out
This can be pushed to a posher dac, if that’s what your inclination is. USB,SPDIF and coaxial are all catered for. Altern for a simplperatively, you can hook your phone or pc up through the USB in, for a simpler network.
Dual mono Class D speaker amp
100w peak per amp, delivering enough for most rooms below concert hall size. The Class D means the unit is reasonably energy efficient too.
Headphone amp
100mW+100mW@1Khz, 600 ohm, 0.1% THD. It’s potent.
DAB+/FM/Internet Radio
Which can be programmed and recorded.
Built in streaming apps
Everything from Amazon to Tidal MQA is supported here.

All within is solid and well machined. A Cocktail Audio logo is displayed and stays on for some while whilst the dual core processor gets itself ready for action. If you have a lot of files to drag and drop onto the X35, be ready to accept the limitations of a dual core machine. It will take several hours to upload your hi res collection. It will also take 6-10 minutes to rip each of your cds. Occasionally a cd will fail to rip to the X35. I found invariably that the next go was successful. For the odd cd in a 1000 that the X35 didn’t like, it was damage to the cd that was at fault here,rather than the disc itself. The CD loading is nice and discrete, just a small slot rather than a tray. Once you’ve put your disc collection on you’d hardly notice it was there.
The X35 does suffer from the occasional freeze. This happened to me, surprise, surprise, during cd ripping duties. It was not frequent enough to worry about, but often enough to mention to you, dear reader. It is, after all, a rather posh dual core computer with audio stuff in it. If it freezes, switch if off at the back and then switch it back on. All is not lost, and at least there is no hard reset sequence to remember.
The GUI that runs the all in one is easy enough to follow. The number of features and how to do it all is written down in simple English in the manual supplied with the X35. It is 115 pages long, and not for the faint hearted. Needless to say, I have not tried every feature on this device as of going to publishing. It may take years….
What I have tried is the following:

The X35 in use
Do all the bells and whistles blend harmoniously together, or is this a Jack of all trades and a master of none?

Headphone Amp
The Headphone Amplifier makes me wonder why I have the Benchmark Dac1. It is that good. For full size headphones, it shows the class of the components and the power it has, and makes even my power hungry AKG K1000 earspeakers come to life.
I have tried the Campfire Audio Ara flagship IEMs(pictured above) with a 6.3mm adapter. There is a deal of hiss which would bother many of you. The volume on the Ara’s was at 30. Whilst it didn’t stop me from immensely enjoying my music, even with Classical, again it’s worth mentioning. Using the digital out facility to my Chord Mojo, the hiss was gone.
Speaker Amp
Whether the X35 could deliver through the speaker taps; this was the make or break for me. I recently purchased a £1000 Arcam FMJ SR250 Class A/D Integrated Amp with Dirac Live built in. It takes analogue in, but as far as streaming goes, it only accepts Spotify. The difference in sound quality was reassuringly small. The SR250 has more linearity than the X35. The SR250 uses Class A for the first 25% of it’s output, then switching to Class D when more is being asked of it. The X35 has a smoother, less wide and more bassy sound signature. It is actually a little more forgiving of many of the more modern recordings out there. It is by no means a slouch to the Arcam. The Arcam was tried with a Lampizator Dac4(£5500 originally) and was then connected with the X35 as a source.

In terms of using the streaming, this works like a dream. Once your stuff is on the hard disc, again, no problems, you can run the thing just like any other music app, shuffle, play next, make a playlist etc. Tidal Masters works fine, although I still found it a bit hit and miss as to what they have in their repertoire. But that’s Tidal for you.

I have used SCVs collection of Nova Fidelity streamers at various audio shows a number of times now, so much so that I had taken them for granted. They were simply used as a quick source for checking out their numerous headphones. It was only when I met up with Matt in Bristol just before the World pretty much grinded to a halt that I had considered looking in more depth at these boxes. The dive in to all that is network streamer has not been as daunting as I thought it would. And it leads me to this question? Why have I got so many boxes? Because this does it all, and it pretty much does it as good. It just has a slightly different flavour, but not one that leaves a bad taste in the mouth. This is a tea party without the Mad Hatter. And I’m most certainly glad that I was invited 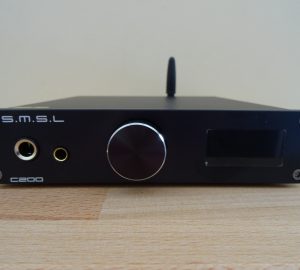