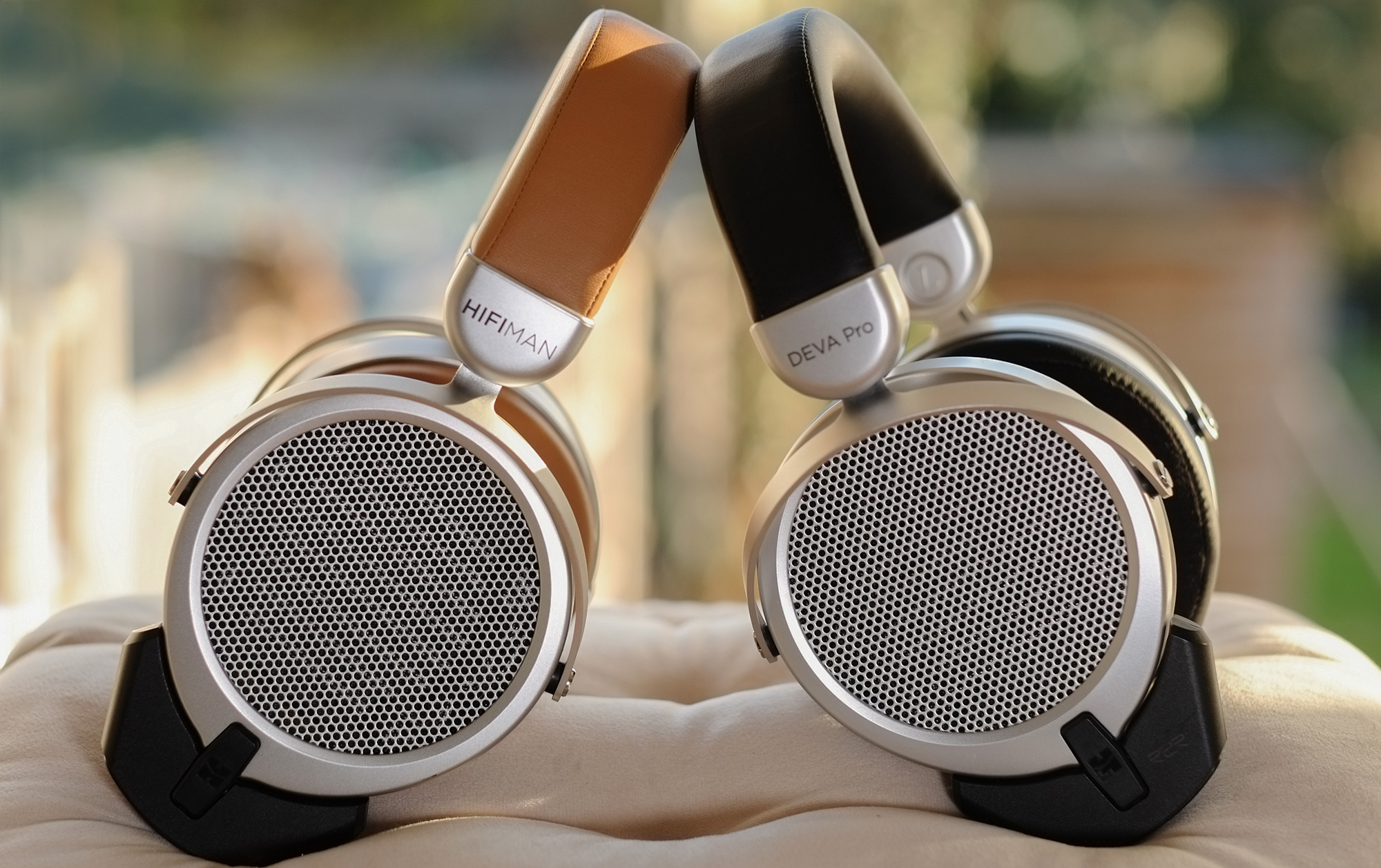 The Deva Pro marks HIFIMAN’s approach to even more streamlining of their technologies and experiences. It’s the 3rd headphone to receive the stealth magnet array after the HE-1000SE’s original inheritance from the Susvara. As the time of writing this review the Arya Stealth is already storming over the market claiming the sub 2k territory, deservedly so with its strong dynamics, linearity, excellent timbre and staging qualities, a rather complete package combining a lot of desired traits.

There’s more to the Deva Pro though than “just” being upgraded to stealth magnet arrays.

The first edition introduced the Bluemini, a BT module that is connected right underneath the cups with a 3.5mm TRRS fit like a rifle’s magazine.

The Deva Pro now introduces the next evolution of the Blue Mini, the Bluemini R2R codenamed Himalaya, a resistor ladder DAC in full BT5.0 fashion supporting all the widely used formats like SBC, AAC, AptX-HD and LDAC and becoming a USB DAC if you decided to sit down cabled to your notebook or PC. During USB, Bluetooth and analog wired mode charging is happening at the same time if you wish so – very convenient.

Seeing that the R2R version of the Bluemini is replacing the old one in all current bundles speaks of HIFIMAN’s confidence about its sound and indeed it proves to be a more refined, more organic and grippy listen with better timbre. Grippy as in more tactile transients, improved dynamisms and better staging depth.

Yes, as can be seen from the pictures the Deva Pro supports both TRRS in the left cup with the Bluemini and also a balanced drive via both cups through the 3.5mm TRRS entries, allowing your desktop setup to flex their muscles. Again, allowing you to listen through all modes while charging at the same time.

Now how does it sound?

As with the OG the Deva Pro aims at HIFIMAN’s traditional neutral-bright again, meaning a rather linear continuity from mid bass to 1k, then taking a slight downward slop towards 2k a few miles later and then going up again until the lower treble starts rising slightly above the rest. This time cleaner and polished though, with textural nuances and their composition not “overbrittled” and smeared, which is especially a blessing in the mid to treble transition, giving the whole picture more clarity and cleanliness. Stealth magnets doing their work again. The whole range is in fact cleaner now, more open, way more sharp in placement and positioning. It’s only natural that we can expect HIFIMAN to implement this in all their headphones now and only a matter of time.

Good control and well-behaved, more reactive to multiple bass lines now, allowing for keeping them separated yet also in line, meaning the Deva Pro can handle pitch differences and not lose composure – a sure sign of the driver being able to keep up during more complex parts due to its better speed, resolve and driver control.

As for extension, the Deva Pro does not reach the level of the Arya Stealth or Arya 2020’s subbass and neither the sustain and heft but it still goes down well before it rolls off.

As for bass levels, slam and punch themselves, these are not designed to batter your head or hit you with a hammer while you get up and yell for more, the bass is tuned towards a more neutral or reference approach and it fits like glove given the newly added technicalities. Yet the Deva allows for a good, thumping EDM session, the slamming of drums and the rumble of King Kong when he gets up for his mourning routine in his latest movie. Now again, everything with a rolloff of course but above 40Hz there is nothing to be missed and going down from there you will miss the lowest notes and their sustain. Still fairly good performance.

The midrange evolves from the original DEVA in new and better ways but instead of just having slapped in the new magnet array HIFIMAN made some more homework to make sure that the tonality and timbre aspects follow the technical foundation. Thus the Deva Pro has been retuned to match the technical leap. Texture, sense of weight, speed, the detailing and nuancing of dynamics for each instrument in the mix is a whole step better now. Generally while the usual suspects apply when we speak about the Stealth magnets benefits, making a review like this almost repetitive, there is another aspect where the Deva Pro is improved upon: timbre and naturalness. In comparison to the OG friends of natural instruments will rejoice in timbral glory. Well, not at the level of the Susvara but more than competitive in its price range for sure.

With cleaner treble performance and clarity due to better controlled soundwave flow, air between instruments and the air of fresh breath is more pronounced and apparent, giving the Deva Pro more openness and the feeling of resolve, while not pronouncing the 10khz+ frequency part which tends to give everything a hazy sheen.

As for emphasis the treble part is a bit more forward than the rest making for a sparkly and livelier presentation, giving instruments more illumination this time.

The improved openness is again, as we know by now, one of the results of its new technical foundation and of course the retuning of the driver to follow up. Less interferences and fractures lead to more coherent airflow or air “guidance”, being lesser prone to reflections on the way. Together with the cleaner presentation and better control the biggest change however is the placement of objects or instruments in the space. It’s far sharper now and moves or stays less “blurry”, thus the feeling of speed and textural composition also leads to a feeling of “effortlessness” compared to the OG Deva where it’s harder to “keep track”.

Slowly and steady HIFIMAN’s is giving every headphone a cloak and a dagger, making refractions and diffuseness disappear into the shadows, quietly and smoothly with more precision than ever before. A further step to reach low acoustic impedance based on the original Window Shade system, now enhanced with stealth magnets. So far every iteration has been an improvement both on physical and acoustic design level and also in tuning, fixing timbre and balance issues in one sweep. The Deva Pro marks is superb value if you’re not in strict need of usual “BT Wireless” requirements that consider isolation from outside noises.

Good for any BT device on the market isolating that feature for itself in comparison as the Deva Pro beats them all in terms of sound. In addition it offers multiple ways to enjoy its sound, be it USB, BT or the power of your own amps.