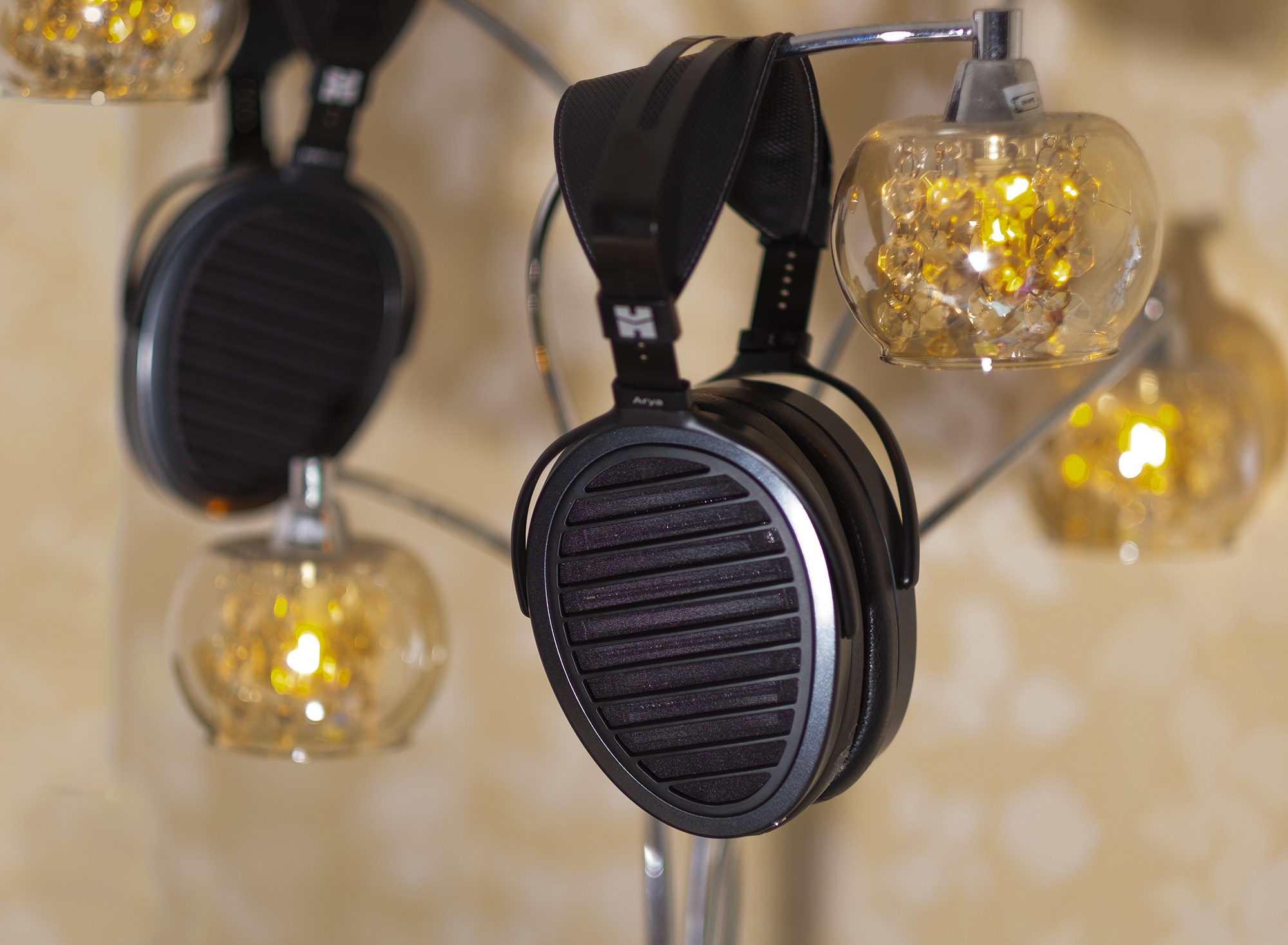 When the HIFIMAN Arya was first sighted, many were wondering where it would fit amongst the many other releases that landed upon the shores of the mythical land of Headphonia. Costing as much as the Edition X’s original MSRP it at first looked like the third entry in that series – with a name change – but when it became clear, it would be given a driver in the fashion of the legendary HEK, the headphone that ultimately defined the transition of the HIFIMAN high end sound from the classic HE series, it was destined to become quite popular and beloved. Years after all, this became true. We are at the third revision now, and one that is quite a bit more radical than the minor V2 revision. Another transition, actually, this time leaving the old magnet structures behind for the stealth magnets. A trickle-down tech that the Susvara introduced and now found its way into both mid- and high end offerings. At the point of this review, the Ananda hasn’t been gifted with stealth magnets yet while a, possibly Asian only release, the Edition XS has embarked to give the Edition line a reemergence.

Everything’s about Stealth Magnets now after the Susvara and the HE-1000SE held it exclusively for a long time and the Deva got it too with its Pro release.

When sound waves pass through the magnet structure via the diaphragm, they are prone to interferences and diffraction with conventional designs as air is moved through them. The Stealth structure ensures this to happen to a minimum for more precision, clarity and imaging precision. In the same vein a stealth bomber’s shape and form which is not a random or artistic choice at all, and ensures deflecting or bouncing off radar waves and becoming unnoticed, HIFIMAN’s stealth system ensures magnets not being in the way of the sound as good as possible.

The introduction of stealth magnets to the Arya transforms the Arya line similarly to what the HE-1000SE brought along for the future of the HE-1000 series.

When the HE-1000SE appeared on the shelves, sporting both the stealth magnets and a higher sensitivity, bringing HE-1000 level performance for portables while actually surpassing them in technical performance notably, it came with a few yet worthy tradeoffs.

While the huge soundstage shrank slightly in size, especially in width, the precision of the imaging or the sharpness of how objects were rendered increased tenfold. The stealth magnets removed the diffuseness of the stage and the placement of objects, giving the whole structure of the composition more realism, breath and overall clarity. Actually, exactly what was promised in the marketing papers.

Does this spoil the review a bit? Well, to a good degree, yes. Naturally, as the topic of stealth magnets comes up, the changes can almost be guessed 100% right.

However, there’s more to all this than just cleaning up the image and unsheathing laser swords and guns to draw and shoot into the vast and dark background, splitting atmos and planets on the way.

The original Arya inherits a lot of traits of the HE-1000. It’s more laid back, relaxed, more comfortable with its surroundings. It shares the large soundstage and the bass rumble, though differs in energy delivered down low, being a tad more restrained and not going to the last end in its treble delicacy as the HE-1000 actually does. Remember, the driver is not the same but being done in the same fashion, with more tolerances during the production.

Staging is somewhat diffuse but not very much so, imaging isn’t fuzzy but slightly smoothed “in”. A headphone not too picky or too revealing, a warm, relaxed listen. Where the HE-1000 maintains more composure and linearity in delivering that credo, the original Arya tends to have a peak at around 6khz which is noticeable but not overly annoying. Could have smoothened out the overall character better though to make it stand out less. Exactly what happened when the V2 came out in the vein of the 2020 revisions. Henceforth, the V2 model is now the reference to which the Arya Stealth Magnet Edition is reviewed.

The Arya Stealth is almost antithetic to the OG. It takes the composure up a few notches, does away with laid-back and instead gets more aggressive, upfront, forward, more attacking with greater dynamism, explosiveness and cleans up the imaging by a huge margin, doing away with the diffuseness and trades off some vastness of the soundstage size for a far sharper tracing of objects. Where the Arya can sound a bit lean at times, the Stealth fleshes everything out with muscles and bones in a show of force.

Headphones with strong timbral qualities to me are headphones like the HD 6XX family and the Susvara. The naturalness, especially in their mids, make listening to real instruments and vocal performances simply a mesmerising, an almost live experience.

The Arya V2 was a solid performer here, but of course not up to the level of the Susvara. The stealth, armored and equipped with a new acoustic design and shaper blades now stands comfortably in the gap between these two, with more naturalness, less rounded and smoothed now, leaving space and breath for the all the finer overtones and the delicate textural components.

Whereas the Arya V2 took a slightly modest approach to delivering the bass in terms of volume, as in delicate, well-defined and more linear than boosted or even boasting but still with power if the music intends to, the Stealth version is rather aggressive and more forward in its approach of bass delivery. Fuller, more in your face and ballsy. All that while not just maintain the same quality as the Arya V2 but even going beyond it: resolve and easy tracking/following of multiple bass lines, clarity of the bass, unfathomed and never congested. All traits of the OG but surpassed here. Bass extension is bottomless, good sub bass rumble and general heft and sustain, however as with every modern HIFIMAN softer in approach compared to the first generation as in the HE-6 but still a very welcome departure from the previous iteration.

The original Arya is clean, clear, resolving in this area with no notable drawbacks, albeit overall more relaxed and polite than upfront or attacking like for instance the HE-1000SE and sometimes slightly lean. Overall, not full and rather warm like the grandfather, the HE-1000 but a bit more cooled down and as linear and almost flat, except when it rises around the upper mid range.

The Arya Stealth decides for a U turn here, being fuller and more fleshed out and brings the inherited qualities more to the front, attacking, aggressive like the bigger stealthy brother (the HE-1000SE) leaving the Arya a bit in the dust with its added technicalities. The barrage of details is now better sorted, clearer, better aligned, and structured. Stealth Magnets doing their work as they are supposed to, bringing instruments more upfront, up close, giving a better sense of their textural composition and the finer details.

The Arya in its first edition had a few minor quirks here, notably in the 6khz and 8khz region, making it prone to sibilance with certain songs and sometimes being a bit too aggressive with genres like metal. The V2 fixed both quirks but kept the clarity and airiness.

The Stealth goes further here, giving the aggression a nice little boost with its more intense energy delivery and added cleanliness. Trails and reverbs are easier to hear fading out in the distance now.

It maintains its philosophy of going all out with its strengths and technicalities and never loses composure when doing so. All while not abandoning the airiness and illumination of its predecessor.

Imaging characteristics are improved hugely here, it’s one of the first apparent things when you put on these headphones, assess the balance and tonality. Whereas the Arya V2 seduced with a large and tall soundstage that had good depth leading to a coherent sense of space and distances, the rendering of objects or instruments inside wasn’t as sharp as the HD 800 or HE-1000SE. The Arya Stealth bridges this rather huge gap and brings the Arya series to another level, closer to the top. Instruments and their positioning, placement are far sharper and precise now and move “fuzzyless” around the still big space that draws the whole scenery well out of your head.

The slightly distant character of the Arya V2 surely helps in perceiving its very large and tall stage –  naturally as the Arya Stealth is more dynamic, punching harder and more relentless, the greater sense of “physicality” also makes the stage appear slightly less. In my opinion, this is aforementioned trade-off is just a matter of psychoacoustics.

All in all this makes the Arya Stealth also more universal than before giving you a nice high end gaming and movies experience next to “just” opening itself up to far more music genres.

Activate Dolby Atmos on your favorite DAC’s input. Start a movie of your choice like Mad Max or Godzilla and immerse yourself in their explosive, thunderous worlds. As the Stealth never loses composure, you can be sure to never lose tracking of individual cues in the mix, no matter how many layers. This is also a strong aspect of the Arya V2, but it’s noticeably beaten here.

HIFIMAN’s high end headphones usually get very underestimated in terms of power or quality power requirements, excluding the Susvara and the legendary HE-6, both which rose to fame also just due to being very hard please. Whereas both of these lead to a far higher percentage of amp discussions within their respective threads (anywhere on the web) compared to any other headphones on the market, the HE-1000 series including the Arya (which is after all part of the HEK family) got rather “shifted to the side”, while in fact absolutely profit from high, clean current. This is similarly true for the HE-500, HE-5LE and HE-4, whose amping requirements were strongly overshadowed by the rise of speaker amplifier enthusiasts with their HE-6’s. Though with the HE-4 the high requirements were noted in its early days already, but the short lifespan of these headphones unfortunately made them forgotten in every aspect.

Anyway. The Arya Stealth is rated at 94db compared to the 90db of the HEK Family and the Arya v2, a healthy boost towards stronger DAPs in the same fashion as the HE-1000SE.

Can you still run it on a smartphone? Absolutely. To the max and fullest? Of course not.

Give it good, clean power in the same vein as the original Arya and you are good to go.

Amping the Arya with a few of my power amplifiers brought them rather close to the Arya Stealth in terms of dynamics, explosiveness and in the finer nuances of the treble, but overall, the Stealth was still ahead with its inherit advantages. The Stealth also benefited from these amps, but scaled less than the Arya. If it’s enough, it’s enough.

There is no room anymore to beat around the bushes. The Arya Stealth is the worthy evolution of the Arya series, expanding on the original’s capabilities with better dynamics, punch, slam and quite a bit better imaging. The genre compatibility is now another level, making the Arya the most universal headphone recommendation before you go up to the big boys.

Deva Pro – just how good is it?