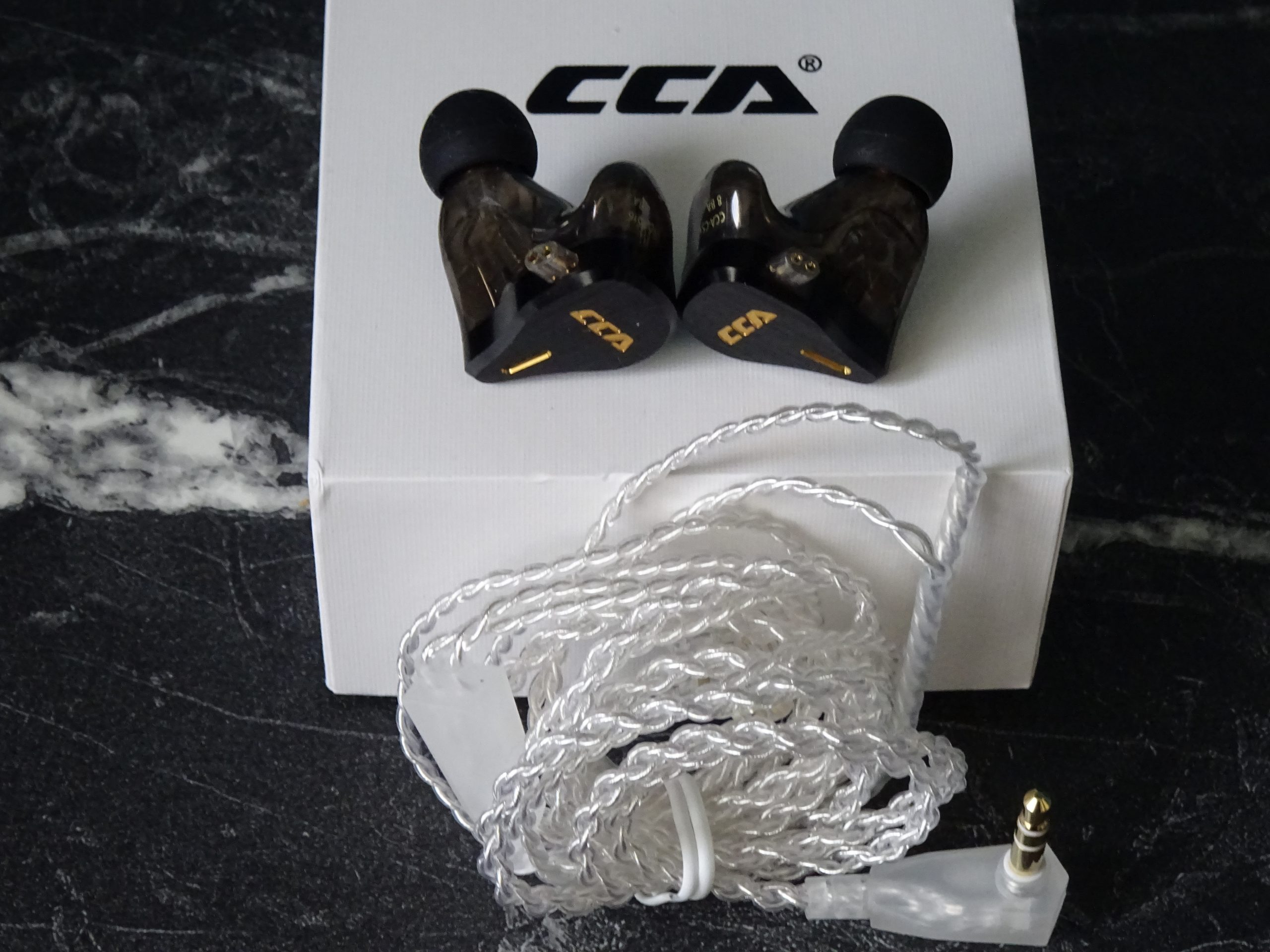 At last! I have the CS16’s from CCA. With grateful thanks from Better Audio US, a loyal supporter from amazon.com, I am now able to complete the circle. I have now reviewed the CCA C4, CX10 TWS, C10, C10 Pro, C12 and CS16. The numbers correlate to the total number of drivers for left and right earphones rather than how many drivers per side, which is how many companies market their products. Now we are at 8 drivers per side with the CS16. This represents quite a step up from the humble C4, which is extremely bass heavy, and rather a handful to listen to seriously. Each step up in the number of drivers causes a leap in sound quality with CCA; although my preference is still with the sound quality of the C10 rather than the C10 Pro, the C12 is a noticeable improvement. At the risk of putting in a spoiler, the CS16 carries on this pattern of development, and outperforms all the rest behind it.

The CS16 changes things up for CCA. They have utilised the more expensive balanced armature drivers throughout the design, rather than their traditional route of DD for bass and BA for the rest. I have a pair of custom IEMs from ACS which incorporate a 5 BA configuration. Whilst the ACS CIEMs are a great sound, I have IEMs, both single driver and hybrid designs that I much prefer the sound quality of. Perhaps it’s unfair to compare to the CS16 to a pair of $600 CIEMs, nevertheless it is with trepidation that I face another all BA setup.

This is normal for an earphone and is an indication that these will go loud without needing external amping. Your phone should have ample power to run the CS16s.

The efficiency of the CS16 can be guessed from the low impedance seen here and the high sensitivity shown above. Basically, the CS16 runs fast and loose and has very little resistance.

That is an impressive frequency response – anything beyond 20-20 kHz is inaudible to the human ear. It gives an idea as to the technical performance the drivers might be capable of.

This is more than a 2 pin connection. It’s the new qdc connection, with recessed pins and a full plastic collar that covers any possibility of over flexing and snapping the delicate connections. This is a real step forward in design.

The look and feel is stylish and comfortable. The contours of the CS16 have taken some for the characteristics of the CCA CS8 TWS earphones. If anything they are an improvement and they have managed to squeeze the 8 drivers into the folds of the outer ear without them sticking out Frankenstein style.

The only accessories are the tips, and they’re nothing stylish, believe me. There are 3 sets of white tips which let down the CS16. Throw them away, for they do no justice to the capabilities. They’re too flimsy by far.

My preconception of a full balanced armature design not being conducive to my musical tastes was immediately justified on bunging said IEMs into my ears. The CS16s were overly bassy and harsh, with a noticeable distance in the mids. That was with the stock tips. I could see that they might well the limiting factor. Surmising that I needed to go silicon rather than comply foam, and thicker rather than thinner, I had a shuffle about with the 100s of spares I own. Unsurprisingly, the sound underwent a complete transformation.

Now I am getting somewhere

Armed with the right equipment I prepared to go into battle. I was sure that these would be a continuation of the CCA pedigree. I just had that niggling feeling about the use of all BA drivers. Why oh why would CCA want to mess with a winning formula? I guess it’s no good sticking with the same old routines and expecting to keep up with, or keep ahead of your rivals. So CCA has gone to 8 balanced armature drivers and that’s that. I must put my prejudices aside and give these the type of listen that you would expect from an objective subjectivist.

Get to the point man!

The nitty gritty is this… The CS16 were a pleasant surprise and gave me an insight into what could be done with a glut of balanced armatures. The current flagship of the CCA range is the best of the bunch. It isn’t as warm and forgiving as the C12, but it has more detail, more bass slam and more control over the music than it’s lesser driven cousin. Caution! Caution! We aren’t finished yet! A review of an IEM in isolation makes no sense without there being a benchmark from which to draw a comparison.

The Shouer Tape retails in the same ball park as the CS16. It is an IEM. It is made in China by a Chinese company. Here is where the similarities end.. The Tape comes in a wonderful load of packaging, is stuffed with a ll sorts of useful accesories, such as a variety of tips, with explanations for what each type is supposed to do to the sound. It has a balanced cable (2.5 mm) as standard, and has a 3.5 standard adapter included. The cable is far nicer looking and feeling and probably better sounding the CS16. Where the CS16 is throwing 8 technically very good drivers at you, given that the balanced armature driver is a step up up from the dynamic driver and has some aspects of an electrostat or planar driver, the Tape has 1 excellent driver; an electrostat. Where the CS16 has no means of storage, the Tape comes with a precisely machined oval storage case. The case is so metal it has a ring to it. It stores the IEMs away and there’s even space for the adapter. There’s a chin strap for the tape; you’ve guessed it – none for CCA’s flagship. Has all of the budget been spent on gimmicky extras? Does the CCA trounce it’s rival?

The answer is….no. The CS16 has a larger sound, courtesy of it’s 8 drivers. There is a wider sound stage , seemingly filling up the IEMs and around them. There is a heightened sub bass and mid bass presence to the CS16s, particularly after going through some 30 different sets of tips to find the best match! The Shuoer Tape IEMs manage to get lower in the bass than the CS16s. They can get as low as 7 hZ compared to the CCA’s 20. The advantage of an electrostat driver over a balanced armature is the speed of response to the electrical impluses it receives. An electrostat is thinner and receives the signals across the whole of it’s diaphragm. The Shuoer Tape has a faster bass response than the CS16s and it sounds less coloured. Many will say that the Shouer Tape is bass light; certainly on immediate listening to the CS16 it might appear so. And there are some who will definitely prefer the gravitas of the CS16 and it’s hefty low weight slam. The slam is not there with the Tape, but the bass sounds much less coloured. The CS16 has a V shape. It has a less noticeable mid section that seems distant and less precise than the Tape. There is more treble energy with the CS16 and I would probably give the CS16s the nod as the winner in this section. If you’re after more excitement in your music, you may prefer the CS16. If you want to get deeper into the heart and soul of your music, and you are on this budget, I’d go for the Shuoer Tape.

$133 isn’t cheap for an IEM. But it is cheap for 8 drivers. Surely, once we’re at this level of sophistication, CCA could bring themselves to enhance their package a little? Not only is the lack of suitable tips a potential deal breaker for those who don’t have spares or who don’t realise how much the sound can be changed by them, but there’s no carry case again. The box is as plain as plain can be. $20 earphones have carry pouches/sacks or cases. Mock leather pouches can be purchased for a $ on Amazon. Yet the attention to detail on these IEMs is admirable. The fit is really good and definitely in the near custom territory. Thankfully, the CS16 overperforms at this price level enough to offset the shortcomings of its packaging and accessories. The competition is hot on CCA’s heels, and time will tell for how long they can maintain this unique no frills approach. 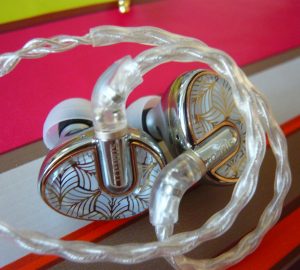